6 months – It’s been that long

Before I get into my recent results though, I want to recap my last eight months, and how I got to being on top of my game again.

Kona in 2016 wasn’t my best, mostly because of my bike. I was at the front of the race, the front of the Ironman World Champs, but maybe being light made me struggle on the descent. I didn’t get the result I wanted.

After Kona, I slowed down with my training, I was doing a bare minimum of around ten hours a week. I just needed to slow everything down, but I still did some late season races. I was third in Thailand, and 4th in Ballarat.

After Ballarat, I had a good break. I needed it.

I had a great Christmas with my family, then I did Geelong 70.3 in 2017, and considering the field was so strong, I was happy with my result of 7th place. The race was the first for many after the holidays, and the swim, bike and run were all really fast. I was ready to dig my heels in and work hard.

2017 is the path to Cairns and beyond

After Geelong, it was Subic Bay 70.3 in the Philippines, and I probably rode a bit too hard in the heat. I came 6th, which was OK, and it was great experience working hard in the head. After the Philippines I went to Taiwan for Giant. We did a big bike ride and some promo stuff for the brand, it was great. In the swim in Taiwan, I missed the lead group, but the bike was OK and the run was OK, and I came 5th overall. It made me realise I had to work on my swim this year.

By the time Challenge Melbourne came around, I had Kona on my mind. I was training for Ironman, not 70.3. I had two key Ironman training sessions with Dan Plews on Monday and Tuesday, and by the weekend, I just wasn’t quite ready for the shorter distance of Challenge Melbourne. It was cold and rainy and wet, and my swim wasn’t great. I didn’t finish the race, and got a DNF.

The field in Vietnam was really solid, and there were plenty of top guys as it’s known as a great race. The swim was really fast and Sam Betton started with a cracking pace. I was just behind the lead pack, and stoked with my position as we started the bike.

Luke McKenzie started out the front of the bike, but he didn’t seem his usual self, and I got to the front quickly. Michael Raelert was away and was riding really well with about a two minute lead ahead of me. On the 2nd lap he got a flat tyre. It was a real shame for him because he was riding so well. You always hate to see a great competitor not get through the race due to a mechanical issue.

Amongst the motorbikes and spectators that go along with large scale races in Asia, I stayed at the front and Mike Philips was just behind me. By T2 I had around a 1:46 lead. The transiting was pretty disorganised though, and as I grabbed my gear bag for the run and opened it, I saw it was the wrong one, so I lost my lead while I was trying to find my correct bag. That was a real bummer. The bags were all just kind of thrown together in one pile so it made it pretty tough.

Luckily though, my running was strong, and I was able to stay out in front without pushing myself too crazy hard. The first part of the run was great and I felt so strong, but by the end I was really melting in the heat. It was crazy hot! I was pretty excited to get to the finish line, and see I was the only guy who finished sub-four hours with 3:45:19. 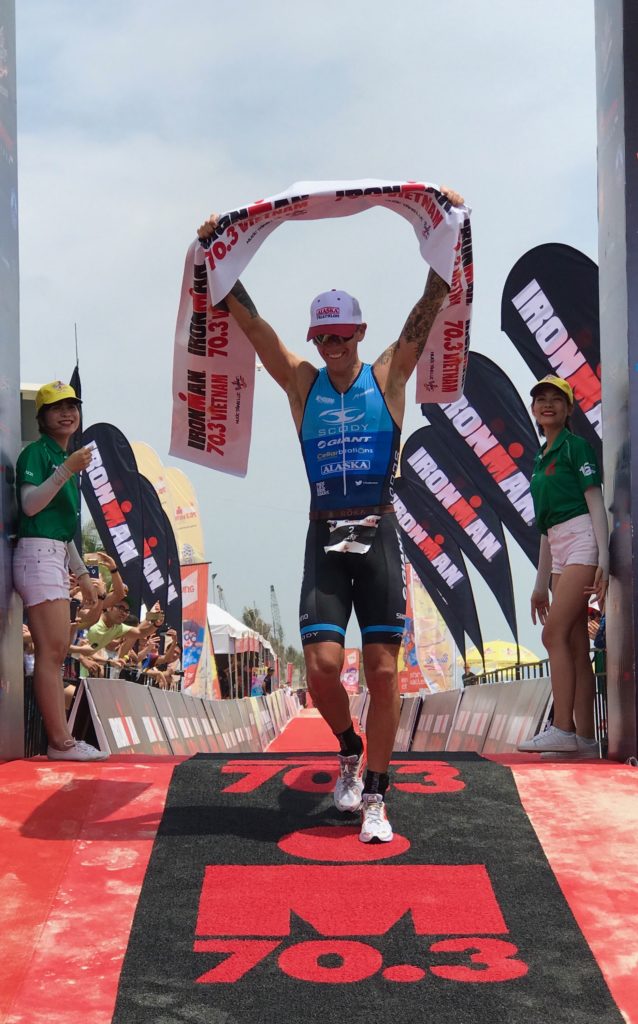 Plews has the plan

Throughout this year though, I’ve been working really hard on my swim. Working with Dan Plews, we look at everything from my diet to physiology of my body and how I train.

Now, i’m really excited for this next block. I’m in the mix now, and am feeling on form. I want to be in the mix at Kona and Cairns. On June 11th, the Asia Pacific Championships are in Cairns, and I’ll be defending my title. I had the fastest run last year, and if I can run the same or a better time, that’d be great.

I’ve just got my eyes on Cairns. Check back in to what happens at Cairns 2017.