Ironman Africa Championships… and I’m back

Apologies for being a bit slow out of the gate with this race report, but I was a little jet-lagged by the time difference – South Africa is 8 hours behind us here in Oz. All good now though and I’m back into training again. The good news is I came back from the IM Africa Championships with a second. And all in all, it was a pretty good race. Here’s how it all went down…

The course at Nelson Mandela Bay is a picturesque spot, but conditions for the swim could only be described as tough. The water was really choppy and one of the first things that happened when I got into the swim was I was stung by a jellyfish. Under the circumstances, I had a solid swim, hanging onto the back of the lead group the whole way. The good thing about bad conditions is everyone suffers. Even some of the well known strong swimmers, lost minutes on the swim. I came out in 50:00 flat, which I was happy with – it was actually a good result considering the conditions.

So coming out of the water, there were three guys up the front and a pack of 6-7 who all stuck together. No one got away on the swim – coming into T1 there was only 20 seconds in it.

The big boys step on the gas

Onto the bike and Marko Albert and Bas Diederen gassed it at the start. Ben Collins went with them too. I was in the chase group, with everyone doing a bit of work so we could stay in touch with the leaders. Then it was just Hoff, Boris Stein and myself. I’ve got to say, Boris rode a great race. He came out of the water over four minutes behind us, so he had a lot of work to do. He rode the fastest bike time with a 4:28:17. He caught us at about the 120km – 130km mark. The guy can certainly ride!

When the three got away on the bike, I knew that they were sitting about three minutes ahead. That’s not ideal, but I felt it was manageable. This is where it pays to try and race smart. I could see they were going pretty hard and I figured the chances of them running well on the back of that were about 50/50. They’re both big guys, it was getting hotter and you could tell they were riding hard – you just had to look at their faces when we crossed paths. 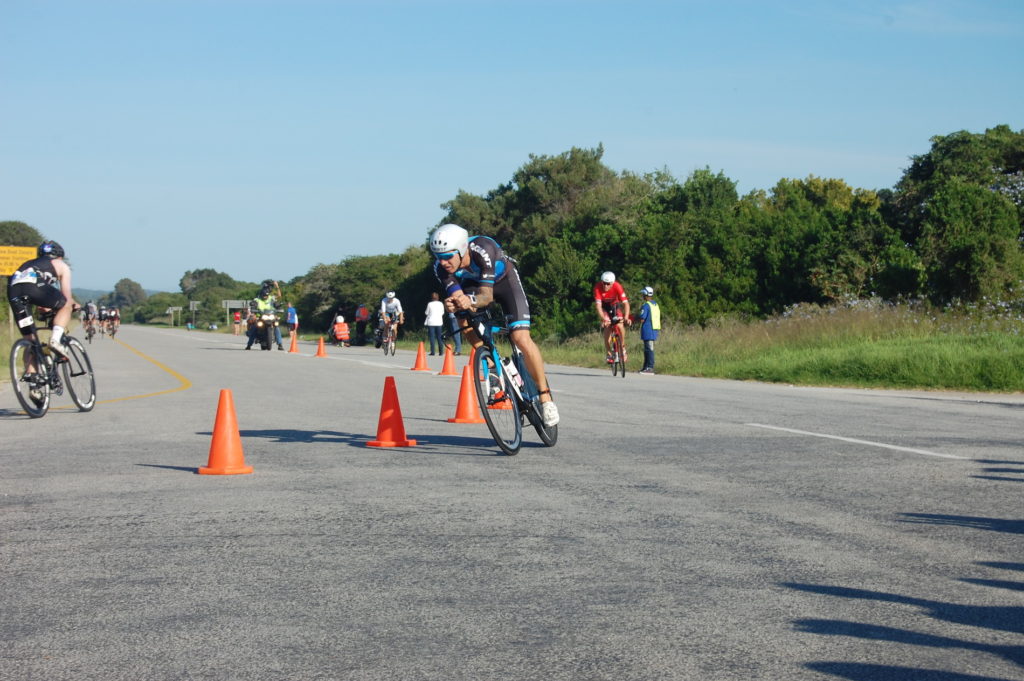 For me, I tried to keep it consistent on the bike and really felt in-control all day. When I look at the stats, my power was pretty even – I stayed within about a 4-5 watt/kg range. I deliberately chose not to gas it at the start and I think that’s what helped at the back end of the race. There was no point riding at 300w in the first 20km when I knew the race favourites were still behind me. Basically, I went straight into riding at IM power – just playing the long game and not burning all my candles at the start.

Everyone has to work out their own game plan, no matter whether you’re a pro or an age-grouper. But for what it’s worth, in my head my strategy is to recover from the swim and then I’m aiming to get through the ride with as much energy left in the tank for the run as I can – because I know I’m going to need it. In the end, the biggest lead the guys in front had was 3:10. To maintain that lead they were pushing a lot harder than we were just three minutes back.

Shoulder to shoulder with the Hoff

Coming off the bike it was Hoffman, Boris and I, with Buckingham about 40 seconds back. Hoffman was right behind me coming out of T2, but I just got into a rhythm and concentrated on the job at hand. I much prefer to stay in the moment than be worrying about ‘what-ifs’ and maybes in the future. I’d love to say that we played a game of cat and mouse – he surged, then I surged… but in reality we ran at a solid, steady pace, caught the leaders and then stretched out and left them behind.

In the end, the race came down to one thing – consistency. Hoff didn’t surge. I just had a bad patch at about 22-23km. It was just enough for him to get away from me and then I was able to get back on track and maintain my place without losing any more time to Hoff. On the day, he was simply more consistent. Full points to Ben Hoffman – he ran the perfect race and he deserves full credit for that.

I’m definitely pleased with my result in South Africa. Conditions were tough and apart from that one bad patch, I felt in-control all day. I stuck with the plan, ran my own race and came out of it feeling confident that I’m on track. The stuff I’m doing with my coach Dan Plews is working – both nutrition and training. I’ve still got a lot of work to do, but I know that I’m heading in the right direction. I think one indication of that is my post-race recovery. I felt much better after this race than after my last one, especially given the harsh conditions (30 degrees plus) and the lengthy trip home.

My ultimate goal was to qualify for Kona, get some valuable points and I did that. Consistent race. 2nd place. Increased confidence. Mission accomplished. Thank you South Africa.