This year I was heading back to Mandurah, Western Australia, to defend my title against a field of competitors who were much stronger than last year. I’ve focused a lot of my year on being fit and ready to come back to Mandurah and defend my Aussie title, while trying to keep the race in perspective and treat it like any other day.

As a course, it suits me to a T, with the canal swim, flat and fast bike segment and the hot and windy run and I was feeling good going into it.

The start of the race went well, coming out of the water with a time of 21:19. I was on par with the main front pack which included, Bozzone, Reed, Kahlefeldt, Appleton, Bennett, Munro and Jurkiewicz. 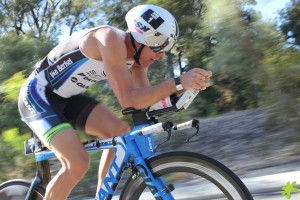 Onto the bike the pace was fast, I pushed it pretty early trying to split the field up a little bit and by the second half of the bike I was really starting to feel it. The wind was picking up on the second lap and the heat was coming at me from every angle. I made good time of 2:03 with a couple of the boys absolutely flying along. Bozzone was super strong and really showing why he is number 2 at 70.3 world champs.

Off the bike, Bozzone was the first to get running. It was down to us, Appleton, Bennett, and Jurkiewicz, we were only separated by a few seconds at the start of the run. I was off in 3rd position and it took a while to get my legs going. I was really feeling the pace of the bike start to bite and a few of the guys were really taking off and began to leave me behind. 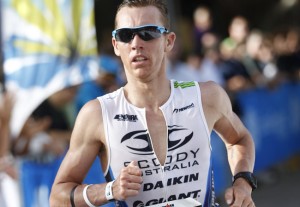 I slipped back to 4th position during the first half of the run. Finally, when my legs came good, more than half way in, it was a battle to try and shake a few of the boys off. I gave it my all and managed to push my way back up to second. I was moving in and out of bad patches all day and the standings continued to swap around through the second half of the run.

Once I firmly made my way into second position it was then a battle of wits and a few mind games with the young pup Appo to get rid of him and put a bit of space between us. I pushed to catch up to Bozzone who’d made his way up the road in front of me. Unfortunately, he’d been able to get a good minute on me and there was no chance of catching him. He made it to the finish in 3:42:58 and I came in at 3:44:30.

He managed to steal the Aussie title off me and I had to settle for second place this time around. Although he is a kiwi, so I’m still technically still the Aussie champ…right?

Thanks to the Asia Pacific team for a great weekend. I look forward to going back to Mandurah next year and trying to steal the championship back.