A course record at Ironman Busselton 70.3 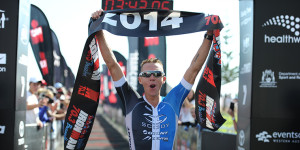 What an incredible day. A course record to take out the 2014 Ironman 70.3 in Busselton, Western Australia. I couldn’t be happier right now.

It was a picturesque morning in Busselton on Saturday yesterday and it unfolded as I had hoped it would. But before I jump into how the race went I wanted to share with you how I almost didn’t make it to the start line.

My preparation leading up to the race had been really good. I’d put some solid sessions in and I was feeling comfortable at where I was. As you can see by my data I didn’t end up training during the last week.

I nearly wasn’t able to make the start line at all as my final week of preparation was thrown into chaos. The timing was terrible. Two weeks out from the race I came down with a bug which went through the squad. I ended up having it the longest, which in hindsight, may have done me well given that I had forced rest and plenty of sleep. Hats off to my wonderful wife, Bel, who looked after me while I was ill.

The start gun went off in Geographe Bay for the open water swim beside the famous Busselton jetty. The water was glass-like and not a breath of wind could be found.

Courtney and Sam lead the swim out of the water. I felt like I had a great swim and was able to stay in the front bunch which really helped to set up the rest of the day for me. This is something I have worked a lot on over the last 6 months or so.

Out on the bike Tom Rodgers and James Hodge put some hard work in early. We were very fortunate again to have have any real wind hitting us.

Coming out of T2 and onto the run was a group of 9 which consisted of Guy Crawford, James Hodge, Courtney Atkinson, Sam Appelton, Alex Reithmeir, Tom Rodgers, Sam Betten, Casey Munro and myself. This is where the race is really going to begin as there was only about a minute between all of us.

Halfway through the second lap I managed to shake Sam and now I was moving in on closing down the gap between myself and Courtney. By the end of 2nd lap (14km) I’d passed Courtney and from there, it was up to me to hold on and ensure the win.

For the curious minded, I was fortunate to break the course record by a few minutes which was held by Brad Kahlefeldt at 3:45:38 with my winning time of 3:43:07. I’ve finally got one over my good mate and training partner. This one’s for you!