Anatomy of an athlete/coach relationship

Get it right and it can be an athlete’s greatest asset, get it wrong and it can have the destructive power of a marriage made in hell, with the details splashed all over the media. I’m talking about the relationship that an athlete has with their coach.

This is a follow-on piece from my recent article in 220 Triathlon where I talk about the importance of the athlete-coach relationship. If you are like me you’ll probably want to subscribe and read the whole magazine on your iPad. 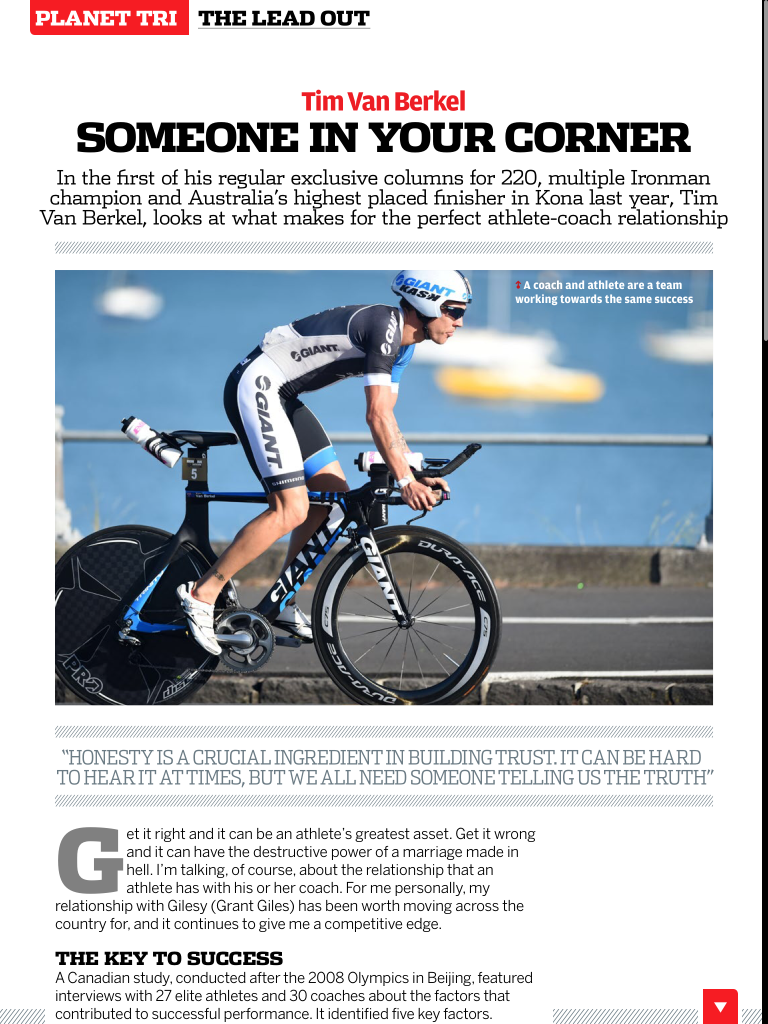 For me personally, my relationship with Gilesy (Grant Giles) has been a long-term partnership, now 9 years, and definitely worth moving across the country for. I started working with Gilesy as a fresh-faced 21 year old. Over those years our relationship has changed and developed, but it continues to give me a competitive edge.

The Key to Success

A Canadian study, conducted after the 2008 Olympics in Beijing, interviewed 27 elite athletes and 30 coaches about the factors that they believed contributed to successful performance. They identified five key factors. The first four were:

No surprises there. However, the fifth factor was the one that all 27 athletes considered to be the most important in winning an Olympic medal or producing a PB. What was it?

So, what makes a strong relationship? Well, here’s my analysis of the ‘anatomy’ of a great coaching relationship. Starting from the top down let’s look at the different parts:

At the elite level, psychological aspects can be as important as your physical performance. Aussie Olympic swimmer, Tommy D’Orsogna, summed it up really well when he said:

A good coach is going to help you improve your mental game by:

Grant has provided me with some great insights and some powerful tools to lift my mental game. One of those tools has been using visualisations. Mentally rehearsing the race and ‘seeing’ myself doing it was a key in my preparation for Kona made a huge difference in the race itself. Using visualisation continues to have a powerful effect on my performance.

Super Bowl–winning NFL coach, John Madden said, “Knowing his coach likes him is more important to a player than anything else.” At the heart of any successful relationship are things like trust, respect, honesty and encouragement. It’s no different when it comes to a successful athlete/coach partnership. Let’s face it – no one is going to give their best when they’re coached by someone who doesn’t seem to care or worse still, doesn’t seem to like them. There’s got to be some kind of positive emotional connection. That’s going to be different depending on the individuals, their ages, their personalities and their coaching styles.

My relationship with Grant has certainly changed over time. It started off as just being an athlete and his coach. Now it feels more like two mates looking to be successful together at our chosen events. I’d describe him as my trusted partner for success.

Shooting From the Hip

Two things build trust – time and honesty. A good coach will give you both. In this sport, and many others, it takes years to become good. So don’t just throw your coach out the door if you don’t see immediate results. Give them time to get to know you and understand you. You’ve got to take a long-term view and work at building mutual trust in your relationship.

Honesty is a crucial ingredient in building trust. It can be hard to hear it at times, but we all need someone telling us the truth. I appreciate Grant’s ability to tell it like it is. We’ve been working together for a long time now and he knows me really well. He shoots from the hip and there’s no BS or ego involved, so I know what he’s telling me is for my own good.

Obviously for both the athlete and their coach physical preparation is where the rubber hits the road… literally! But for a coach it’s about much more than planning sessions, crunching numbers and yelling from the back of a motorbike. A good coach will be constantly evaluating, using all the ‘tools in their toolbox’ to tweak the program and get the best out of their athlete:

One of the great advantages of having a long-term relationship with Grant is the way we’ve matured together. As I’ve grown as an athlete, he’s been able to change and adapt my training. He talks about the way my training goals have changed over time in our Q&A session. Together we can focus on both my short-term goals as well as the big-picture career aims.

Feet on the ground

Finally, no matter how much you mature as an athlete, it definitely helps to have someone in your corner who believes in you and in your ability to bring it on the day. Sometimes just having them there when you compete can make all the difference.

Ironman Cairns 2013 was a tough race for me. A slow swim and a four-minute drafting penalty left me 21:58 behind Luke McKenzie coming out of T2. I was a man on a mission! One of my vivid memories of that race was being on the run leg and coming past Gilesy. He was going crazy at me from the sidelines, shouting at the top of his voice. It was hilarious, but it gave me some serious encouragement just when I needed it most. He did the same thing at Kona last year, when I was in a world of pain at the end.

As well as being a mentor and supporter, a great coach will believe in you and push you to succeed even in those times when you don’t think you can. They can be the familiar face and the encouraging word, in the midst of the crowd, which lift you beyond what you think is possible. Let me finish with a special thank-you to my mate and mentor, Grant. You’re a bloody champion!

If you haven’t already done so, sign up now for some great little insights delivered free into your inbox.